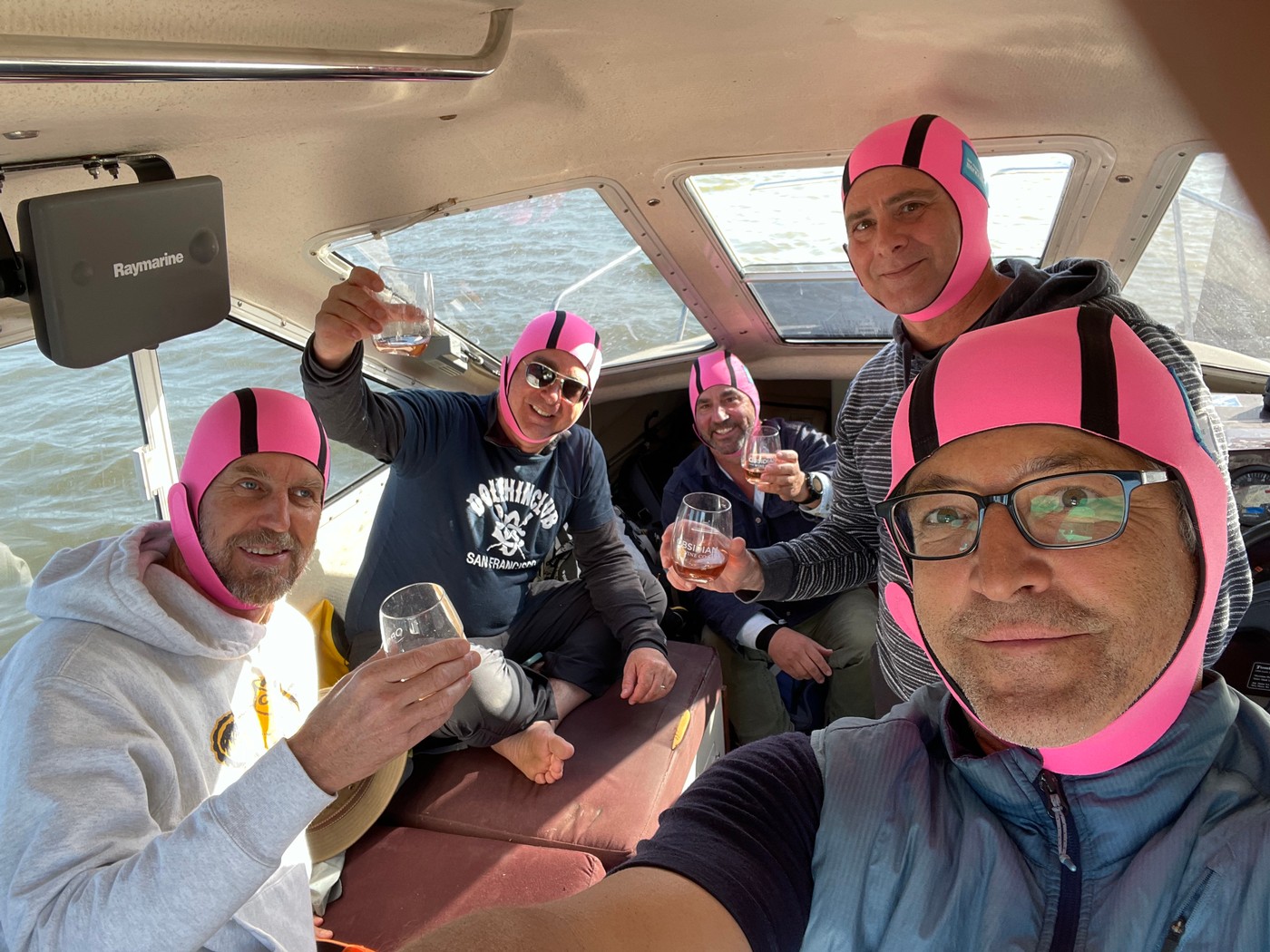 They came. They saw. They swam.

They also ate a lot. And slept in the accompanying pilot boat. And at one point, the San Francisco Bay current started pushing them backwards.

Put together in partnership with San Francisco Baykeeper and Dolphin Swimming & Boating Club, the Rosé for the Bay Relay happened over the course of 24 hours on April 30 and May 1, 2022. The journey covered 40 miles, one freestyle stroke at a time — down the Napa River, across the cold and choppy waters of San Pablo Bay and San Francisco Bay, to Aquatic Park by Fisherman’s Wharf. 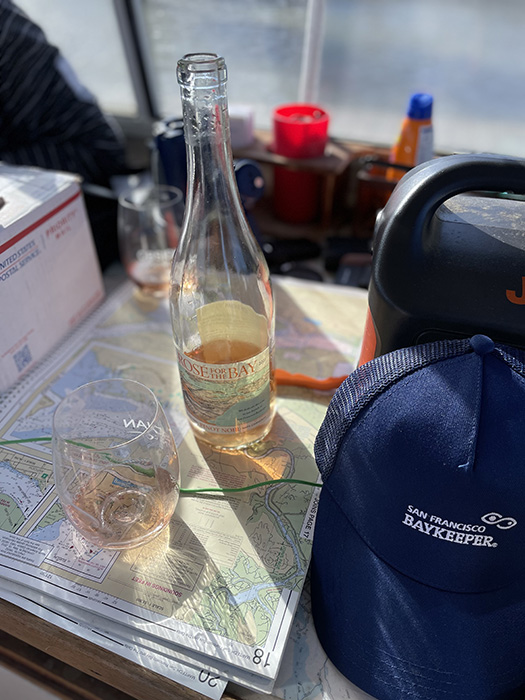 Some thought they were crazy. Others wondered why they did it. Peter and company had at least three reasons:

Reason #1: The swim would celebrate the release of Obsidian’s Rosé for the Bay, which raises money for San Francisco Baykeeper and their ongoing fight for clean bay waters.

“We all feel that right now that it's time to step up” to help save our environment, Peter says. “You know, the cavalry isn't coming. We're the ones who are gonna be taking care of these waterways and forests and streams and all the rest of it as our environment changes.”

Reason #2: It’s fun and rewarding to complete a feat of endurance. As Peter says, “San Francisco Bay is perhaps the greatest open-water swimming venue in the world — winds, currents, cold, Alcatraz and the Golden Gate, and the occasional biting seal.”

Reason #3: Perhaps most importantly, the swim would honor the life of pioneering vinter Nicholas Molnar, the father of Peter and Obsidian co-founder Arpad Molnar. Nicholas, who passed away in January of 2022 at age 94, originally planted Obsidian’s Poseidon Vineyard in 1974, from which Obsidian’s Rosé was produced.

“He loved the bay, and this is why he moved here,” Peter says. “He could have a boat and see the ocean. This was what he fell for when he had the chance to come to the United States from Hungary. So that is a big part of the reason — the theme of the whole swim.”

The journey started on Saturday, April 30, 2022, at Cutting Wharf Boat Launch along the Napa River, not far from the Obsidian Poseidon Vineyard. The swim team ate fresh oysters, Peter threw together a bouillabaisse, and they toasted the occasion with Rosé for the Bay. 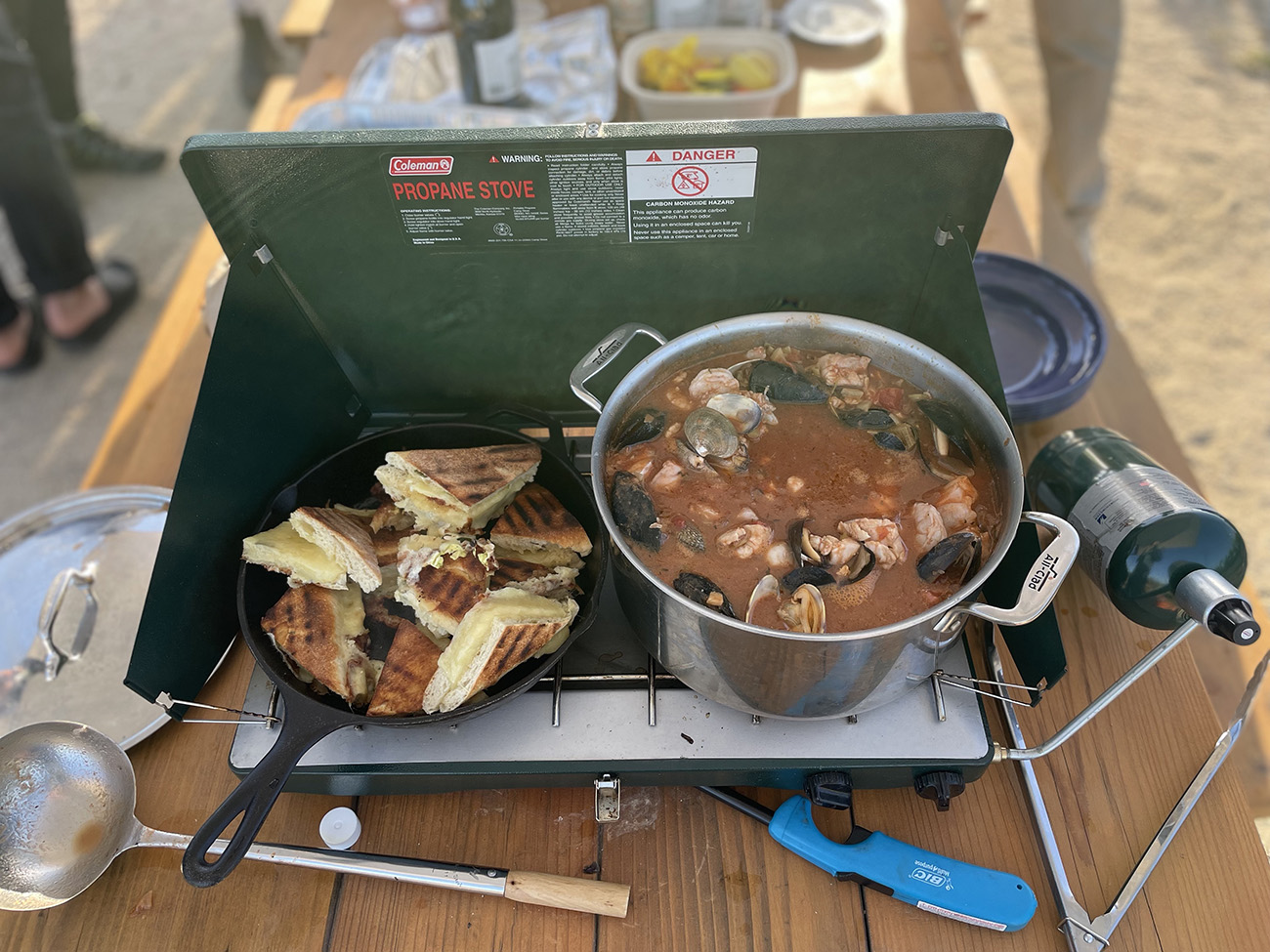 Then they donned their pink San Francisco Baykeeper swim caps and started the relay at 9 p.m. Each swimmer took turns swimming south in 30-minute sessions. When they weren’t swimming, they warmed up on the boat, ate, and readied for the next session. 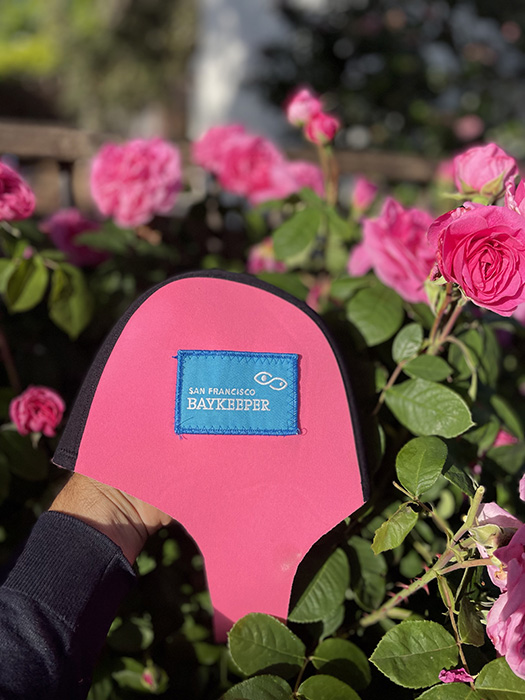 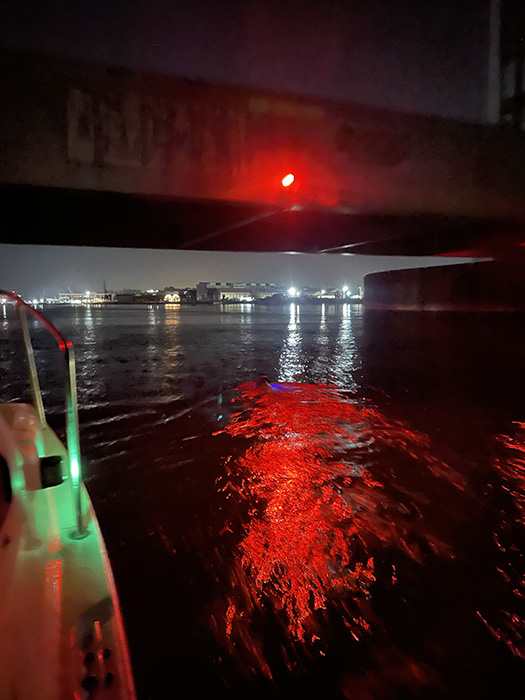 “The old joke is, if you’re cold, you’re not swimming hard enough,” Peter says. “I never stopped eating, personally, because like 70 percent of your body heat is generated by the act of digestion. So, eating is really important, just staying warm.

“[The experience] feels like an odd sort of athletic bender,” he says. “Everything gets very basic, primal. You’re just swimming and eating the whole time.”

The long journey eventually took the Obsidian crew across San Pablo Bay to McNears Beach, then past Paradise Cay and Angel Island before making the home stretch across San Francisco Bay, west of Alcatraz, to Aquatic Park on the shores of the city.

Everything was going well. The swimmers were making great time.

“It's very technical planning,” Peter says. “The currents in the bay are very strong, very complex. We had a whole route plan based on the moon cycle and the currents. You know, we really hit it right.”

Then, things didn’t go right. “We got in our own version of the Bermuda triangle,” Peter says.

On Sunday afternoon, while heading south through San Francisco Bay, between Angel Island and Alcatraz, the Rosé gang swam right into an unexpected back eddy and 20-knot winds.

“There was a point where we were just getting sucked backwards,” Peter says. “We swam backwards for two hours. It took us four hours to grind our way across the bay.” 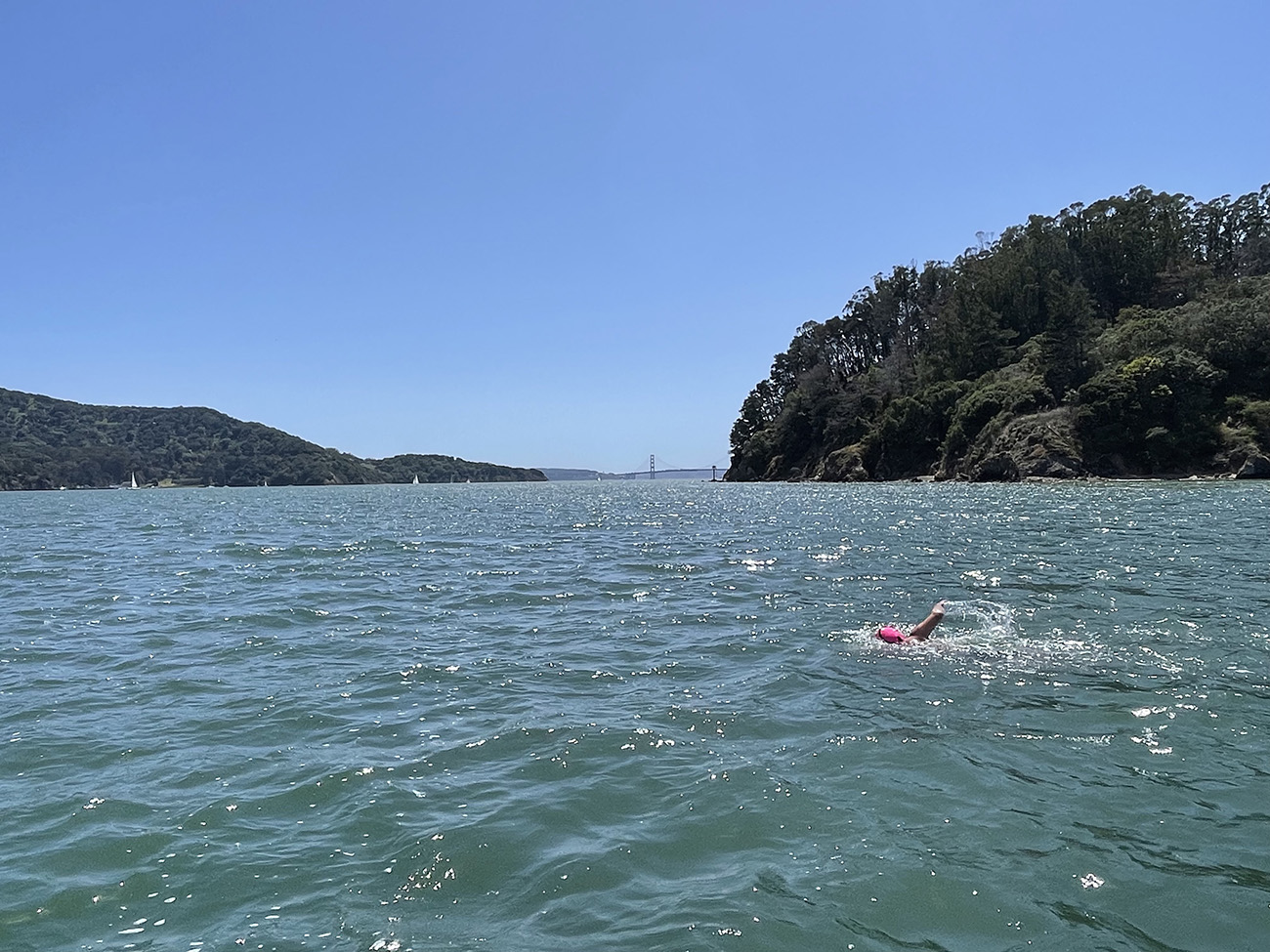 Adding another challenge, tankers began releasing into the bay, headed out to sea. “We had to temporarily pull our swimmers out of the water for safety. But there was never a moment that we were not gonna do it. I was like, ‘Huh, okay. This is part of this adventure.’”

The Obsidian team finished the swim at sunset, carrying ashore a bottle of Rosé for the Bay.

“It was a ton of fun,” Peter says. “Swimming is so solo. But when you're doing it as a group of people in a relay — overnight, 24 hours — it's not a solo event anymore. It's an awesome combination of, like, a really good road trip and a marathon.”

The swim raised $13,000 for San Francisco Baykeeper. You can still support the effort by purchasing Rosé for the Bay. 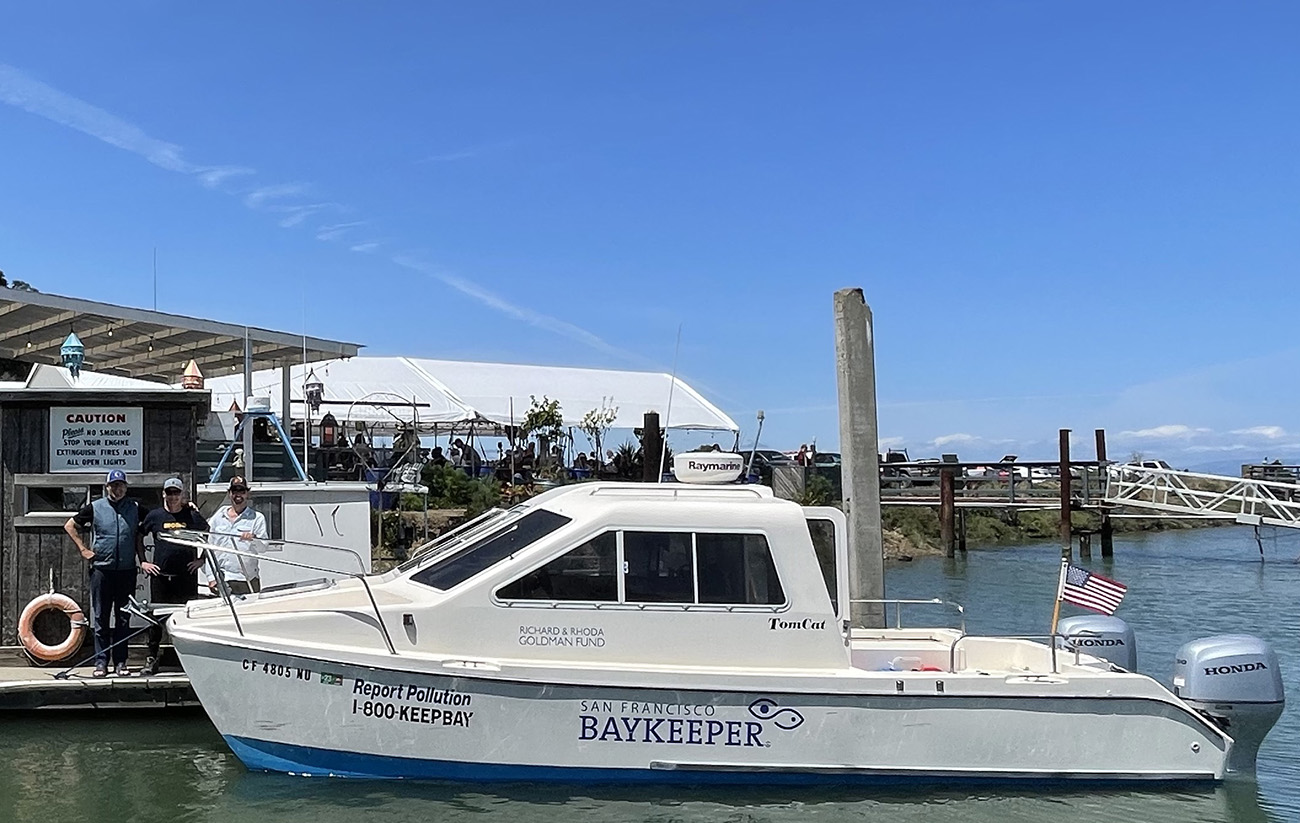